Hey guys! Now that the book is officially out, I figure I’d show you a bunch of the sketches and schematics I came up with for MACHO GOMEZ, and his debut (albeit only) appearance in the DEADPOOL universe.

Before I even started on the pages, Jody (editor), Daniel (writer) and I (stud) needed to nut out the look of Deadpool’s newest rival. Daniel sent me a short description of a bandito-esque alien with no ears and six fingers, and told me to go nuts with it. That I did. Daniel is a true collaborator and had a lot of good input when it came to Macho’s creation. We must have made an alright team, because we pretty much got it right the first try haha.

Macho is a hardcore bounty hunter from space, and being named as he is, I automatically thought of a Boba Fett crossed with Tuco from GoodBadUgly. In my mind, bounty hunters are scavengers in a way, running and killing and playing by their own rules, surviving anyway they can. So playing on this, I liked the idea of Macho’s arsenal to look very improvised and cobbled together, almost organic rather than a typical merc with big fuckin guns.

In the actual comic, I had a lot of opportunities to play with Macho’s costume, and give subtle hints of practicality to his seemingly random and nonsensical outfit. Stuff like the respirator/waste-recycle-unit on his back that his pipe-stache and dick sombrero feeds into, little rocket spurs on his boots, and even his alien sombrero can be pulled down around his body like a second skin poncho, which happens later in the second half of the comic.

Macho’s ride was no exception to the “home-made” rule, and by this point we had come up with a nice theme of splicing recognizable technology and weaponry with crazy crustacean looking things. And before you say it, yes, EXACTLY like Geoff Darrow. Haha. 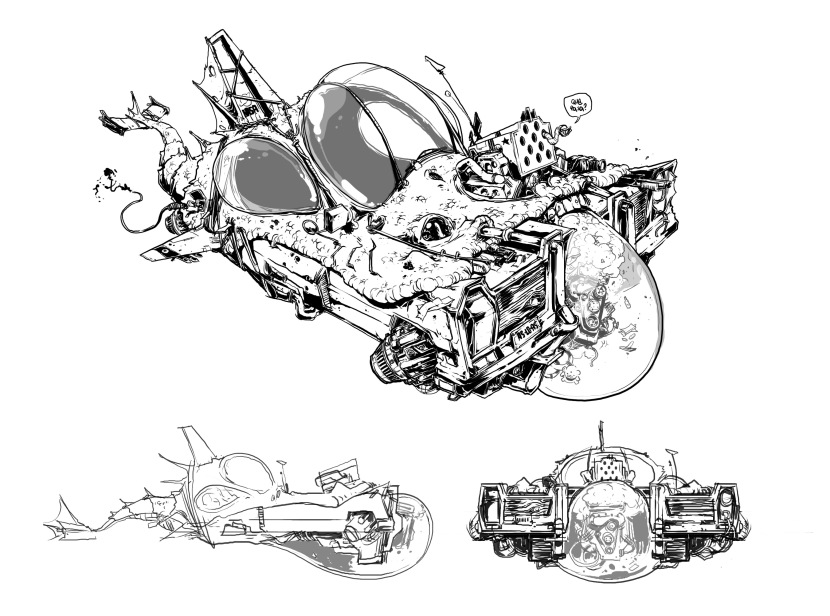 Character creation is a lot of fun, and for me, is probably the most entertaining part of making comics. You really get to build on a characters history and personality without the use of words. If a character has an eyepatch, or a crown tattoo or a  scar on his dick, that shit is history, there’s a story behind those aesthetics. And while most of my designs look like a random selection of bullshit accessories and dicky trinkets, I’m always trying to find a purpose for those things being there, which in the end, make the character all the more “real” and easier to accept in the world they reside.